{a true story are our irregular instalments chronicling some of the ‘challenges’ we’ve faced in day to day life here in Ghana, as we struggle to get our heads around bureaucracy and all sorts of cultural mishaps. The lesson being, you’ll either laugh or cry.}

Part one can be found here, and part two here}.

Ghanaian (adj.) to be of, or from Ghana.

And from our family dictionary:

Ghana-ed (verb), as in to have ‘been Ghana-ed’. To have experienced unnecessary frustration in attempting to achieve a task initially thought simple. Symptomatic only of expatriates in Ghana.

We’ve been here for a while now, and it’s been a long time since we’ve pushed to the door of the padded cell. Let me explain… 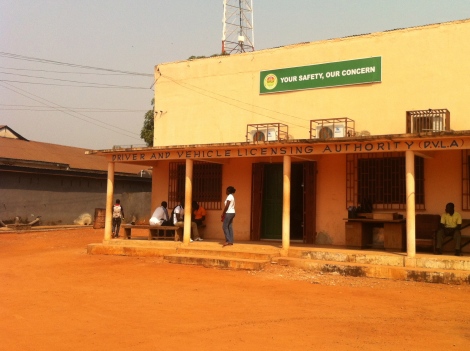 With some changes in housing and life this year, it seemed high time for me to bite the proverbial bullet, and get my drivers licence. As utterly fantastic it has been to have a driver (really I just pinch Bill’s and make him ride a bike to work), it can be somewhat limiting, and I’m an independent type of girl.

So, last November, a mine employee and I headed to the nearest town with a licensing authority, less queues than Kumasi, and the same distance from the mine.

But before cast any dispersions, let me say, the main protagonist in the story is me. I admit it (where others before me have not!). It was my stuff up, combined with a heady dose of bureaucracy that really brought the whole situation undone.

But back to our story. In November I headed to the licensing office with my New South Wales (Australian) drivers licence, to complete the relatively simple process of changing it a Ghanaian licence. But, the night before we noticed that the Australian licence had expired. No matter I thought, it’s not like all recollection of how to drive is wiped from the memory banks the day the licence expires.

How wrong I was. It was noticed instantly. There were seemingly endless discussions, I was shuffled into the District Officer and he sternly told my companion (never looking me in the eye) that he would under no circumstances issue me with a Ghanaian licence. Letters with ministerial letterhead were produced stating we needed a valid overseas licence and a valid work permit (take note of these details, there will be a test at the end). There were strong words that he was a man of the law, and would follow it to the letter. The implication being of course, that I was not to offer a bribe, and particularly after the indirect tongue lashing I had just received, I had no intention of doing so. There were (serious!) suggestions that I fly back to Australia to renew my licence.

So, at the end of this first saga, I emerged, shamefaced; with my Ghanaian learners licence.

When Bill found out, he was beside himself with glee.

I wasn’t going to take this L plate situation lying down. So I googled renewing a NSW drivers licence overseas. Had I have this done at the beginning, we would have avoided this half of the mess, and, just as importantly, the aforementioned teasing by spouse. Take note! You can renew a NSW drivers licence overseas, up to 2 years after it has expired.  Clearly one does not forget how to drive, for those of us licensed in NSW at least, after their licence expires. I sent off the paper work, and my gorgeous mother-in-law couriered the licence to me. High 5’s all round.

After the Christmas break, in the flurry of the new year, new housing, new school, trying to buy a car and Bill being incredibly preoccupied with work, I headed to out again with the same mine employee. As he had a meeting later than morning, we left early.

We arrive at the office. It is full to overflowing with young men waiting to sit their drivers test. Our paperwork joined the queue, and we waited. A fine example of bureaucracy followed. A signature was needed. There is no stand in. Only the signature of the District officer will suffice. His 2IC does not have the authority. But he was out. And so he was rung. The reply was the classic, “I’m on my way, coming”. Which, believe it or not, was kind of heartening. You see “I’m on my way” seems to mean, sometime in the future I will get in the car and head in your general direction, I’m thinking about coming. But the “I’m on my way, coming” means progress. Means I’m actually in a mode of transport and headed in your general direction. It’s a happy phrase. But as the sun rose slowly overhead, we wondered where he was coming from. My companion, long given up on attending his morning meeting, suggested Accra.

We sat under the glare of the African sun with listless young men, whose blank gazes stared into the middle distance. We watched a rooster peck its way around the dusty car park. The morning was punctuated by the incessant bleating of taxi horns cruising for customers and the straining grumble of forestry trucks (Still Anointing, Say Yes to Jesus, Foresight). Men and women in khaki uniforms, red lanyards and black boots passed in and out of a middle office. Sometimes a mobile phone pressed to their ear. Who were they?

Amidst phantom sightings of the District Officers car, the wheels of bureaucracy slowed turned. Bills licence was given to me (success no. 1). Documents were checked and rechecked. ‘Do you have your passport Ma’am?’

You know that sick feeling in your gut, that something is going to go wrong, but you just don’t know what. I’d felt it all morning, I knew this moment was coming. Well, with a lurch and a thunk, my stomach fell, and I knew this was it. And it was the double bummer, that it was my fault. I’d left my passport at home.

‘But you photocopied my papers last time.’ I protested, mouth dry.

‘Yes, we did, but it seems your visa has a problem.’

I scoffed. Now I know my visa doesn’t have a problem. This will be easy to fix.

How very wrong I was.

In another example of a tangled stream of paperwork, I have three (yes, three), Ghanaian visas. Two tourists visas and one resident’s visa. The odds were against me.

Yep, they’d photocopied one of the tourist visas.

‘Right!’ I said brightly, trying to ignore the tightening in my throat.

When our South Africans friends are faced with (ahem) challenges, THEY MAKE A PLAN. And that is just what I was going to do.

‘Do you have an email address sir? I can ring my husband and get him to email it to you. Would that be ok?’

The plan rolls in to action!

12 unanswered calls to Bill’s mobile later (why, why, WHY does he have it on silent? To avoid phone call’s from an increasingly deranged wife?).

Right, new plan. I’ll call the mobile phone the kids have for the trip to school.

‘The number you have called is not available at this time’ replies the strongly accented African computer voice.

Ok, time for another new plan.

I know. I’ll ring our cleaner. Bless her heart, she answers. Bless her again, she is at work. ‘Can I speak to Cecily [our eldest] please?’

And Cecie, bless her heart, comes to the rescue. I take a deep, deep breath, and very patiently begin the long list of things she needs to do. She finds my passport, takes a photo of it (using photobooth on the computer) and after some slightly frazzled moments emails it to our contact at the office. Thank God for early adoption of technology. She rocks!

The stalker-esque phone calls have been replaced, despite dangerously low phone charge, by obsessive checking of email. It arrives. Woohoo. High 5’s and moonwalks about the carpark. Until I open the attachment.

Turn your phone OFF SILENT!!

I ring a geologist who works with Bill, whom I am friendly with. He is probably one of the most genuinely kind, generous, unassuming and overwhelmingly polite people I have ever met. All of these character traits plus the fact you don’t launch into a conversation with a Ghanaian with “Hey man, can you help me right away?” There are greetings, enquiries after family, and discussion of Christmas to go through. I hold off as long as I can. “Hey you don’t happen to know where Bill is do you?” “I’ll be in the office in 5, I’ll get him to ring you”. Thank you, thank you, thank you.

After several more phone calls back and forth, it turns out Bill was lecturing some visiting university students, and so perhaps wasn’t ignoring me on purpose, and perhaps had a valid excuse to allowing me to walk to the outskirts of crazy land.

An interminable 15 minutes later, he has arrived back home, scanned my passport page, and emailed it again. Hallelujah! He rocks!

By this stage, it’s not just my nerves which are getting frayed. But emails are checked and printed.

And the District Officer has arrived back.

Papers are signed. We are done, I start to congratulate myself. And then a weird thing happens. I am told to sit again. In the crowded inner office, with seating for 20, but capacity currently exceeding 40 men of various ages, 2 women employees and a tv blaring Africa Magic at about 120 decibels. It seems as though I need to meet another signatory. She tests my eyes (down to the smallest line on the page!), photos are taken, fingerprints scanned; and in the middle of it all, a travelling salesman arrives in this grimy, inner, 8” by 8” office (housing four of us, a desk, 2 chairs, various eye testing equipment and a desk mounted camera). Wearing futuristic glasses, and with a mere click of your fingers, rechargeable lights shaped like red and white mushrooms magically switch on and off. He also has samurai sword BBQ knives for sale. So my morning ends, with one man haggling over the price of the BBQ knives, and the signatory wearing the freaky goggles as she completes my paperwork.

And me, well, while my wallet is a fair bit lighter than I expected it to be, can now drive in Ghana. Woohoo.

Now, we just need to buy a car….sigh.