One of the joys of travelling, hell, one of the joys of life, is eating and trying new foods. But moving to a new country whose palate and cuisine is so different to our own, combined with the day to day mundanity of cooking for 5 has had its challenges.

No more mega-shops at Coles or Woolies, with grocery shopping now taken at a much slower pace of visiting markets, roadside stalls (how I love car window shopping! The convenience!), and visits to the 3 or 4 “supermarkets” in Kumasi for anything requiring refrigeration, and for those obruni items you just can’t buy on the road, like olive oil. And yeah, I know I should be adapting our lives to the local produce, and largely we have. But some things I just don’t want to give up, I’d rather have olive oil than palm oil, and cheese, although we now eat much less of it, is a not-negoitable item in my diet. And I don’t mean La Vache qui rit (aka The Laughing Cow, little triangles of white cream cheese) which is ubiquitous in the smaller stores, and weirdly, seems to require no refrigeration.

And it’s an exciting day when Debbi (the South African woman on site) or I find a new supermarket. Phone calls of glee! “Guess what I found? Cream!”  “No way!” “Ok, its long life, box cream-cream, but it’s cream”. Or a butcher shop that has refrigeration and a deep freeze. Happy days!

Unlike Accra, Kumasi’s expat community is small and fragmented. There aren’t expat bars or shopping malls (or websites!) to share information, so a personal recommendation goes a long way. A lovely Austrian woman who lives in Kumasi has been a great help, pointing me to butcher shops, and a small supermarket which sells, are you ready for this, fetta cheese, chick peas, red wine, frozen berries, and fresh pastries. Imagine my delight when I bought a fresh croissant. And then my confusion when I found it had been filled with the aforementioned La Vache qui rit. Why? Why? Why?

So, we’ve had to be adaptive, which is kind of fun, and kind of a pain in butt if you’re not in the mood. Bill has already talked about the ongoing bread making, and the farm has been a fantastic source of basil and parsley, so we always have pesto and tabouli in the house.  We are in between harvests at present, waiting for the seeds I bought in France to (hopefully) produce. And it is the repitiveness of the food that’s tricky to get around. When it was mango season, I went to the markets, and where the week before there was ample tomatoes, cucumbers etc. everyone decided that they needed to sell mangoes. Crates and crates and crates of them, and it was a hunt to find much else. When we first arrived I naively (romatically?) thought that the produce would come from the sellers own farms, like a massive, oh-so-chic, farmers market. But no. The produce which ends up at the markets has commonly been through 2 or 3 sets of hands, before it arrives at market. The other tricky thing, is that Ghanaian food is just very different from ours. Bread is sweet and dense, not chewy and sour. Crunch is not a factor. I made some lavosh bread yesterday and Bill said “A year ago I would have paid GHC10 for this”. What a compliment. The dried fish is something to behold. And goat rectum soup is just not for everyone’s taste.

As Jock says, “That dried fish just blows my mind”.

But there are upsides of course. Spice are ubiquitous in Ghana here.

We have all developed a taste for chilli, with tabasco sauce now being a fixture on our dinner table. And I’m quite partial to every Ghanaians favourite condiment: 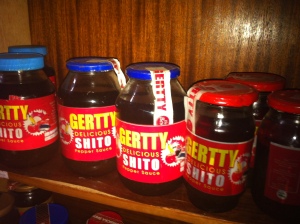 But broccoli? What’s that? 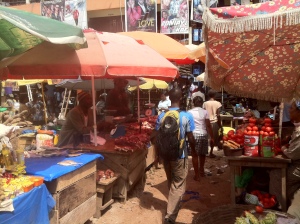 And while we aren’t spoilt for pizza shops or Thai takeaway, we sometimes head over to Sly at the Guesthouse, for a night ‘out’. A change is as good has a holiday!

3 responses to “Have you done the groceries?”